The last show of the year for me, Wild Honey by Michael Frayn at Hampstead Theatre, was to have been directed by Howard Davies. 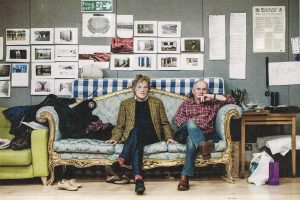 An hour before our final preview of Bruce Guthrie’s production of Rent at Theatre Clwyd we heard that Howard had passed away. We were devastated.

I still don’t know how I ended up designing the first show, Hay Fever, at the Noel Coward Theatre in 2012. It was my first encounter with European jazz from the 1930s, a recurring musical theme from Howard, which I believe George Fenton introduced him to during the original production of CP Taylor’s Good.

It took me the whole of that production period to realise that there was no hidden agenda with Howard. It was refreshingly straightforward to create sounds that assisted the storytelling. It was obvious with Howard’s clear direction when sound had a place and, equally importantly, when it didn’t; when it needed to be realistic and when it had to be overtly theatrical to help punctuate a moment.

Seven other productions followed. Rory Kinnear’s new play, The Herd at the Bush Theatre; Howard Brenton’s Drawing the Line at Hampstead; Tena Štivičić’s epic 3 Winters in the Lyttleton; Steve Waters’ play about Occupy London and St Paul’s Cathedral, Temple at the Donmar; the award-winning revival in the Minerva of Somerset Maugham’s For Services Rendered (more 1930s jazz); Tom Stoppard’s Hapgood back at Hampstead; then finally, earlier this year, Christopher Hampton’s adaptation of Enemy of the People at Chichester.

Each production was crafted with humanity and care.

Thank you for teaching me so much about the art of theatrical storytelling, and inspiring me to be better at both the art and the craft.