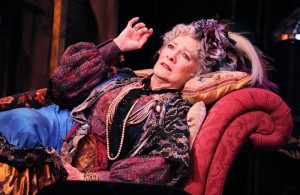 Music and lyrics by Jerry Herman, book by Jerome Lawrence & Robert E. Lee in a new version by David Thompson based on the play “The Madwoman of Chaillot” by Jean Giraudoux as adapted by Maurice Vallency.

This was the production on which we evaluated the Sennheiser 9000 Digital Series radio mics:

An all-star cast came together at the Charing Cross theatre for the London production of Broadway musical, Dear World. Sound designer Mike Walker, a longtime Sennheiser user, saw the production as the ideal way to see how the Digital 9000 system sounded.

Mike Walker was responsible for the sound design of Dear World at Charing Cross theatre “I wanted to try the 9000 series on a production with various vocal ranges, to hear it with excellent singers at the top of their game,” he said. “The show was using fourteen 5000 series systems – EM 1046 with SK 50 transmitters. After a few weeks of letting the show settle and having become used to how it sounded, I switched to the 9000s.“

“I really like the 5000 series – of the existing Sennheiser systems I think it’s the best suited to voices and I’ve been very happy with the quality of audio it delivers,” Mike said. “But the 9000 series completely surpassed it – it’s the best-sounding digital microphone system I’ve heard. Because the audio is so transparent, it highlights the way that compression circuitry in analogue systems affects the dynamic quality of the sound.

“It’s very straightforward to set up and is an excellent amalgamation of technology, engineering and audio quality, the latter being my priority. It far surpassed what I thought it would be capable of. Compared to any other wireless microphone system I’ve heard, it’s quite amazing!”