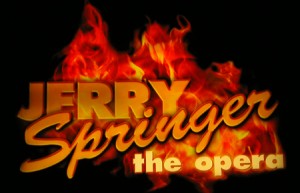 Following a highly successful run at the National Theatre, Jerry Springer – The Opera moved, towards the end of 2003, to the Cambridge Theatre in London’s West End. The show has been picking up rave reviews and in 2004 has received a string of awards including a prestigious Olivier Award for Best Sound Design.

Mike Walker, Managing Director of the sound design company Loh Humm, has selected Tannoy on many previous occasions. For Jerry Springer, he wanted to ensure that the audience was able to capture every word of the show’s large cast. “There are no real introductions to sections,” he explained, “so you have to know absolutely what is about to be sung or played, especially the incidental lines spoken by Jerry. It provides many additional words to the sung vocabulary of the West End stage, and it is important that we deliver them clearly to the audience!”

Alongside Tannoy V300’s, the system, rather unusually, makes use of ‘open’ SuperDuals i.e. drive units out side of their cabinets. This concept first pioneered by famous Sound designer, Martin Levan (Cats, Aspects of Love, The Music of Andrew Lloyd Webber and many more) is used to great effect in Jerry Springer to enhance the vocal clarity of the actors.

The controversial UK tour of Jerry Springer – The Opera opened at the Theatre Royal, Plymouth in January and continues to twenty-one other venues over the following six months.

Olivier award-winning sound designer, Mike Walker, adapted his design to allow for fast turnarounds and variety of venues. “The show is playing for a week in most venues, so, at the design stage, it was imperative to make sure that the system was easy to configure.

“There is a reduction in cast size from thirty to twenty-one and a smaller orchestra of six rather than eight, so inputs were able to be reduced accordingly.

“It was important for me that the engineers moving the show have sufficient time to get the speakers in the right position, focussed precisely and working together as a system, rather than throwing in lots of speakers and then trying to equalise them in order to make them work together.”

Equipment for the tour is supplied by Blitz Sound, who have been involved with the production since the Edinburgh run in 2002.

Whilst control is similar, it is reduced to enable it to fit onto one frame of Cadac J-Type. Supplementing the sixty-slot frame are two Cadac D16 digital mix matrices. Radio microphones are the 5000 series from Sennheiser with a mixture of SK50 and SK5012 transmitters.

In the orchestra pit are thirty-two ways of Cadac M16 mic preamp through which all the mics are fed. The mics are mainly from the Neumann and Sennheiser stable with an Opus Audio DI box on the acoustic guitar. “With a DI box, you assume that what you put in is what you get out, but having run some tests before this production, I was amazed how damaging some DI boxes can be. The Opus was the most transparent of all the units we tested.”

Walker has forsaken his usual A/B loudspeaker system for a single system of Opus Audio components. “I needed something that was capable of dealing with the range of venues we are visiting, from pros arch theatres to concert halls, whilst providing a transparent but effective reinforcement system.”

Processing is minimal. Four BSS TCS804s inserted on the matrix provide time correction for the main system and two channels of Cadac D16 are inserted across the front fills and delays.

And the end result? “We have certainly changed the way the show sounds, gaining a clarity I thought we would never regularly achieve on a touring production. The incredible transparency of the Opus is allowing the other audio components to realise their full potential. There is no equalisation on any of the main system, only a high pass filter for the front fills and delays. Four orchestra mics use the Cadac M16 high pass filters, but other than that, there is no equalisation on any of the inputs, including the radio mics. Amazing.”