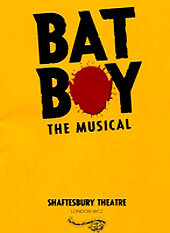 London (December 10, 2004)–The current “hot show” in London is Bat Boy: The Musical at the Shaftesbury Theatre. Sound design is by Mike Walker, with equipment supplied by Blitz Sound, installed by production sound engineer Ross Portway and Walker’s team from Loh Humm Audio. As part of that gear set up, there are no less than seven XTA SiDD dynamics processors being used.

Walker previously used five SiDDs on Jerry Springer – The Opera at the Cambridge Theatre, for which he was presented with the 2004 Olivier Award for Best Sound Design. On that show, the XTA units were inserted on the drum channels to provide instant recall and transparent control of different parts of the audio signal. On Bat Boy, additional units were inserted over the guitars and bass. The Bat Boy band comprises two keyboards, guitar, bass and drums, with the SiDDs 14 channels inserted on the guitar, bass and drum kit. The audio is being mixed on 68 channels of a Cadac J-Type console, with the SiDD patches being recalled via MIDI from SAM, the Cadac control software.

“The SiDDs are programmed with a variety of compression and gating patches which are recalled via MIDI during the performance,” said Walker. “All the patches are geared to a particular song and recalled on cue.” Rather than just store the individual gate or compression setting, Walker programmed the SiDDs to recall the entire channel strip settings. “That’s to ensure that when we jump around from cue to cue, particularly in rehearsal, the processing will always be in the correct state,” he said.