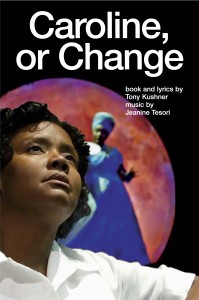 Book and lyrics by Tony Kushner, Music by Jeanine Tesori

Louisiana, 1963, in the immediate aftermath of the Kennedy assassination. Caroline, a black maid to a southern Jewish family, is struggling to keep afloat both emotionally and economically, while the young son of her employer tries to make sense of the world following the death of his mother. A musical exploration of human relationships, love, loss and social transformation.