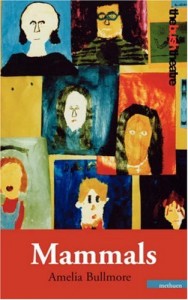 The production is set in a kitchen, although as you read through the script, there is much made of the sound of the front door down the hallway. The way the door opened or closed often highlighted the emotion of the person entering or leaving.

Very early on we thought that it would be better to build a “BBC Radio” style door so that the actors could use it effectively and create the right sound at the right time. Impact sounds are notoriously difficult to recreate credibly with sound effects.

John Titcombe, the production manager, squeezed the prop door under the side of one of the seating blocks, with all the fittings mounted on the one accessible face.

The show was controlled by the DSM from a minature control box, which had an Akai S6000 for replaying sound effects. I’d prepared loads of exterior sounds (cars passing, general traffic etc.) for when the door was open.

The first problem we discovered on starting the technical rehearsal was that cueing the sounds was difficult as the DSM couldn’t see the prop door and so was reliant on the sound of keys for the opening, but had no clue until it was too late that the door had closed.

A speaker was placed directly behind the prop door and a micro switch was wired in line with the negative core of the speaker cable. All sounds were routed to this speaker only so that when the door opened, the speaker became live. The DSM only had to ensure that the sound was playing before the door was due to be opened. A large piece of foam on the door against which the speaker was pressed when the door was closed started to give this a level of credibility.

The second problem was that in the (old) Bush Theatre (above a pub) you could clearly hear the sounds of Shepherd’s Bush Green outside. Cars, buses, sirens – all very distinct and varying depending on the weather. Needless to say, the sounds I’d prepared didn’t match at all so it sounded very false.

A microphone (Crown PCC160) was placed on a window ledge outside the theatre (slightly under an overhang so that it didn’t get wet) and this replaced all the sound effects. So when the door was opened by an actor, the real sounds just got a bit louder and a bit clearer. With a bit of careful juggling of the loudspeaker position and the foam on the rear of the door, we were able to create a natural rise and fall in level when the door was opened as if it were down the hallway.

This deleted some 100 cues from the DSM’s prompt copy.

Towards the end of the show the script called for a taxi to arrive. Booking one to appear outside every night on cue was slightly out of the scope of the sound budget, so we put additional speakers under the seating block and routed the taxi sound effects to them to emulate the external sounds.  The taxi sound was also fed to the speaker that turned on when the door opened so making it louder and clearer as the actor left.

The next problem came in 2006 when the show toured. A three hour recording of Shepherd’s Bush Green traffic was made to attempt to emulate the original production. Having the sound running constantly didn’t work. The speakers could never be in the right position (evenly placed behind the audience) and it became a big distraction. So we only used it when the door was opened. We still used the same switch/speaker mechanism. It worked well enough, but became more of a “sound effect” and didn’t have quite the same credibility or magic that it had in the original production at the Bush.

So if anyone needs Shepherd’s Bush traffic sounds, circa 7.00pm one January evening in 2006…