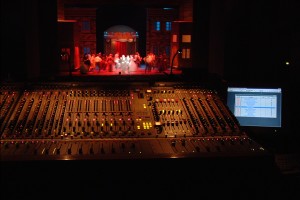 Music and Lyrics by Ken Low , Book by Ming Wong

Chang and Eng, the locally written Singapore musical returned for its fourth season in Singapore from 5th  January to 5th February, 2001 in the Kallang Theatre. First staged in 1997 by Action Theatre, the musical told the life story of the legendary 19th century Siamese twins, Chang and Eng. Sound design for this season was by Mike Walker with sound operation by Chris Simpson and production sound engineering by Eddie Teo of Loh Humm Audio Company Pte. Ltd.

Two frames of Cadac J-Type made up the main front of house console. Both frames were demonstration units from Cadac Electronics PLC, one of which was already in Singapore for seminars given by Cadac last October for their distributor Sennheiser Electronic Asia Pte. Ltd.

With twenty nine adults and twenty six children onstage and an orchestra of thirty eight in the pit a large sound control system was required. Inputs consisted of thirty two Sennheiser 1046/SK50 radio mics for the cast plus forty eight feeds from the orchestra pit with the usual array of Akai S6000 for sound effects and Lexicon and Yamaha reverbs.

On the output side, a dual speaker system was used with Tannoy S300s being used for the “Chang” system and  Tannoy 3836 drivers for the “Eng” system. Amplifiers were from Yamaha and processing generally from Yamaha or BSS. The dual system meant that a considerable number of matrix outputs were required and so both desks output sections were utilised. The J-Type provided the matrices for the “Eng” system and the Series 5 for the “Chang” system.

The main problems were bringing all sections of the orchestra under the J-Type DC master control whilst maintaining the discrete audio paths required to send microphones to the required system. Some vocals from the J-Type had to get to the Series 5 output section and all the orchestra had to reach the J-Type, for both DC master control and for some mics to be sent to that matrix. The remaining orchestra mics than had to return to the Series 5 to go to the other system.

The J-Type was running SAM with about 85 cues for the show. “Not many by some show’s standards, but quite a few given that we only had a day to plot the show and seven hours for technical rehearsals.”

Without the Cadac it would have been almost impossible to achieve the quality and detail of sound required given the size and scale of the show.

The show will be transferring to the Cultural Centre, Bangkok, in March.

Singapore – Chang and Eng, the made-in-Singapore musical returned for its fourth season in Singapore from January 5 to 21, 2001 in the Kallang Theatre after receiving raving reviews from the local theatre-goers. First staged in 1997 by the ACTION Theatre, the musical spun the life story of the legendary 19th century Siamese twins, Chang and Eng, who were conjoined by a small stretch of flesh since birth. Developed by Ekachai Uekrongtham, the President and Artistic Director of ACTION Theatre, the musical boasted a brilliant east-meets-west music score by local music veteran, Ken Low, and a realistic sound design by Mike Walker from London based Loh Humm Audio Company Ltd. Drafted in to complete the team were Chris Simpson, the sound operator, and Eddie Teo, the production sound engineer, both from Loh Humm as well.

“With a cast of 28 adult actors, 26 children and a total of 38 orchestra members, the musical is of a considerable size and has a certain degree of grandeur about it. When working on a musical of this scale, my intention is to remain as transparent as possible by mirroring the actual sounds that happen on the stage. I want to create a real ‘live’ experience for the audience by making the sounds as natural as possible. Sound, in this case, has to be a communicative link that involves everyone, including the audience in the theatre, ” comments Walker, who has formerly worked on 25 other productions in Singapore over the last six years.

According to Walker, the most significant challenge that he had to overcome was the miking problems associated with the close physical proximity of twins, Chang and Eng. The distance of 0.3 metres (approximately 12 inches) between the two leads resulted in apparent phasing problems, a phenomenon well-associated with the use of multiple radio microphones very close together. To solve this, Walker designed a dual sound system by allocating six Tannoy S300 loudspeakers with four Meyer 650P subwoofers for “Chang” system, and six Tannoy 3836 drivers with two Bose 302 sub bass speakers for the “Eng” system. The six positions were located around the pros including four flown from a height of more than eight metres above the stage. Completing the loudspeaker system were two pairs of Meyer UPA-2P Self-Powered UltraSeries™ loudspeakers located upstage for sound effects. Additional JBL Control 1 loudspeakers for were used for both front fill and delays.

The costumes for this musical also presented an additional set of obstacles to the sound team. In the second act of the musical set in New York around 1830, many of the performers wear top hats or large bonnets, typical of the period. These tended to trap the sound or cause reflections back into the radio mics. It took much adjustment of hat wearing and microphone positioning to achieve the natural sound that Mike was aiming for.

A total of 35 Sennheiser EM1046/SK50 wireless systems are deployed on the performers. To capture the sounds from the musicians, all just about fitting into the downstage orchestra pit, Walker used Neumann KM140s on high strings and Thai musical instruments; Neumann U87s on the grand piano; Sennheiser MKH40s on the low strings; AKG C414s on percussion; and a collection of Shure mics on drums.

To provide sufficient power for the main speaker system, Walker used a mixture of Yamaha H5000 and P3200 power amplifiers. As for processing,  BSS FDS355s are used for the Tannoy 3836 drivers and Yamaha DEQ-5s for the Tannoy S300s, with BSS FDS334 mindrives for radio mic delays. Sound effects were on an Akai S6000 sampler and reverbs were Lexicon PCM91s and Yamaha SPX990s.
Elaborating on his philosophy, Walker highlighted that he chose to omit as many  electronic controls as possible such as limiters, as he strongly believed that “the system had to have as great a dynamic range as possible to allow the sound to appear as natural as possible. The interface between the sound design and the performance is the sound operator and as little as possible should be taking control out of the operator’s hands.”

Providing the control system for the operator was a two frame, 32 channel fully modular Cadac ‘J’ Type Live Production console which Walker defined as “a unit with an extremely clean sound that has been designed with musical theatre requirements absolutely in mind.” He said that part of the Cadac console was a demonstration unit previously used in a workshop conducted by Cadac for Sennheiser Asia, the official distributor in Singapore. Impressed with the sound quality of the console, he decided to ship in the other half to expand the console’s channels and capabilities. Inter-linking to the Cadac was a 48-channel Soundcraft Series Five console which was used for the orchestra as well as providing additional outputs. Walker also maintained that he kept onstage monitoring to a minimum providing only for the performers to be able to hear the orchestra wherever was required.

To Simpson, the sound operator for Chang and Eng, working on the musical presented a brand-new experience, as it was his first project in Asia. While working on it, he mentioned that his main setback was the time constraint. Given only two days for rehearsals before the first performance (including to technical rehearsals packed into the first day and two full dress rehearsals in the second day,) Simpson had to maximise the time to identify and solve some of the operational problems while leaving the fine-tuning details to be made during each performance. He considered his role to be a reactive one as he had to constantly anticipate and adjust to the audio coming into the microphones at each performance. He confided that without the Cadac it would have been almost impossible to achieve the quality and detail of sound required given the size and scale of the show.

After completing its run in Singapore, Chang and Eng will be making its way to Bangkok, Thailand, this coming March.