On a calm, cloudy, wind-less October Saturday morning, the middle day of the Giants of Steam on the Bluebell Railway, we followed Film Facilities Manager (and sound recordist in his own right) Tim Parkin, from Kingscote Station to Imberhorne Lane where we gained access to the trackside.

With a rack of Sennheiser 9000 series radio mics in the back of our van and using the Dante output of the rack directly into a Macbook Pro recording into Reaper, MKE 1s on SK 9000 transmitters were attached to mic stands and placed either side of the track at twenty metre intervals.

Fortunately for this play we wouldn’t require long approach sounds, as the noise pollution from planes flying out of Gatwick and road noise from vehicles passing over Imberhorne Lane bridge were pervasive. The aim was for multiple recordings of the same train in order to be played back through evenly placed speakers through the theatre.

With the trains leaving Kingscote Station and powering up the 1 in 75 incline of Imberhorne Bank with a good head of steam, evocative and clear recordings were possible. A distant whistle acknowledged our proximity to the track.

After the first train of the day headed by visiting engine LNER B12 4-6-0 No. 8572 pulling a rake of Mk 1 carriages up to East Grinstead, we planted a Zoom H5 in the middle of the track alongside Ryan’s GoPro to record the return to Kingscote.

Coasting down the bank from East Grinstead, 8572 hissed under the bridge and on to Kingscote.

Forty-five minutes later, after 30541 had coasted its way back to Kingscote, visiting LMS 8F 2-8-0 No. 48624 hauling 3 Mk1 and 3 Bulleid carriages, makes its majestic way up the incline with its injectors on.

After 48624 clanked its way back to Kingscote, the lunchtime Pullman train hauled by SR S15-class 4-6-0 No. 847 sedately made its way to East Grinstead.

The return run of 847 gave us our last recording of the morning.

With grateful thanks to Tim and all at the Bluebell Railway for a superb morning. 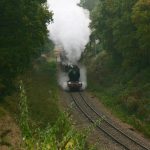 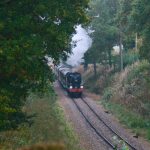 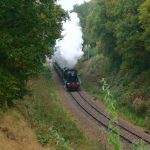 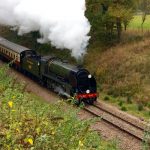 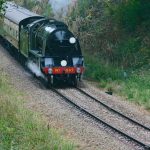 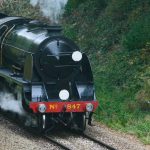 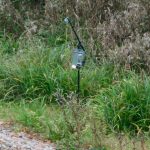